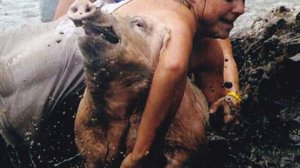 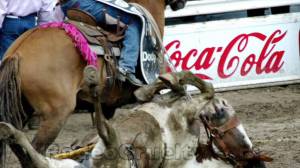 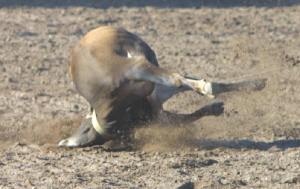 There is no justification indulging in acts of brutality. Most people have no idea what goes on in rodeo. In the US alone, there are over 5,000 rodeos, and of those, only about 1/3 are professionally sanctioned. Rodeo is a cruel spectator blood sport- Roman colosseum style. Domestic ranch animals are tortured, injured & killed for entertainment.

Uncivilized thugs amuse each other with events that cause animals to suffer & die. Events that promote violence & cruelty can NO LONGER be tolerated in a civilized society. There is a DIRECT CORRELATION between animal abuse & domestic abuse. It categorically cannot be ignored.

PRCA (professional rodeo cowboy association) propaganda defends its abuse of animals by hiding behind “tradition & culture”. Pro rodeo folk claim that the events in rodeos are outgrowths of legitimate ranch work. That’s a fucking lie. It is all just hype for a billion dollar industry based on cruelty & cover-ups. Any examination of rodeo shows precious little foundation in the western culture.

Take bull riding. Defending strapping/prodding/riding a bucking bull as legitimate ranch work? Please…it holds absolutely no agricultural purpose whatsoever. Bull riding is a variant of bullfighting from old Mexico. Back then the riders would ride the bull to death.

Pro Rodeo folk describe their victims as ‘athletes’ in order to fool the public into thinking that these animals have chosen an abusive life in rodeo.

Rodeo contestants must practice, not many people think about this disgusting fact. They practice on multiple animals. A dead calf is just the cost of doing business. The crowd witness the mere 8 seconds that the animals ‘perform’, they are oblivious that there are 100’s of hours of unsupervised practice sessions. Ropers are allowed to cripple as many as 3-4 animals a day practicing for their “performance”.

Another disgusting fact; Calf Roping was renamed ‘Tie Down Roping’ -as a means to hide the true nature of the ‘event’. Calves spinal cords can be severed when forced to an abrupt stop while traveling at 30 mph. This occurs after an infant cow is tortured in a rodeo chute. Their tails are raked over the bars, their tails and ears are pulled, they are hit with 5k volts from a hot shot electric prod (even tho that is a direct violation of the PRCA rules), then the chute opens and a terrified, panicking calf runs at an excess of 30 mph into the arena. The rider ropes the calf & jerks back. The result is a neck snared calf hurdling through the air. Many broken necks have been documented. Still, then the rider picks up the calf, slams the calf to the ground and proceeds to tie 3 of the calfs legs. These events are timed. Speed injures and kills these animals. Good ol USA.

More pro rodeo propaganda from rodeo defenders is that these animals are ‘born to buck’. If rodeo animals were “born to buck,” they wouldn’t have to be spurred, prodded or have flank straps. Electric prods & raking spurs used to stimulate wild behavior in tame horses and bulls. Bruises, broken bones, paralysis & death is the result of rodeo contestants brutality and violence to animals for their demented idea of ‘fun’.

#AnimalCruelty harms society as a whole because it signals & normalizes insensitivity to the suffering of other beings. As with all civilisations of human beings-we learn & (we should) realize that things done years ago were wrong. I mean, public hangings were once ok.
Pro rodeo trolls are nasty thugs. Crude, vulgar, loutish things that view animals as disposable.
Here is a snippet of other folk I’ve run into on Twitter in regards to rodeo:

It is essential to know that the PRCA wrote the humane rules & enforces them. Accountability? You’ll just have to take their word for it. Bottom line: Treating animals as objects for our amusement is to treat them without the respect they deserve. When intelligent mammals are allowed to be degraded this way, We’re behaving like our ancestors have, centuries ago.

Back then, we knew nothing about animals intelligence, sensitivity, emotion, and/or social needs…they were only seen as brute beasts & treated as such. To continue such barbaric traditions, (defending anachronistic practices) just means that our society is insistent on remaining ignorant & insensitive.

Rodeo can’t exist without the slaughter industry. They sell their abused injured animals to be chopped up & grilled to feed a mass of desensitized zombie shit for brains. Don’t be hollow.

Tradition tho
You don’t want to believe that you’ve been conditioned to eat corpses.
ᴡᴇ, ᴛʜᴇ ᴄᴏɴsᴄɪᴇɴᴛɪᴏᴜs
Some people expose
The agriculture giant is fucking huge