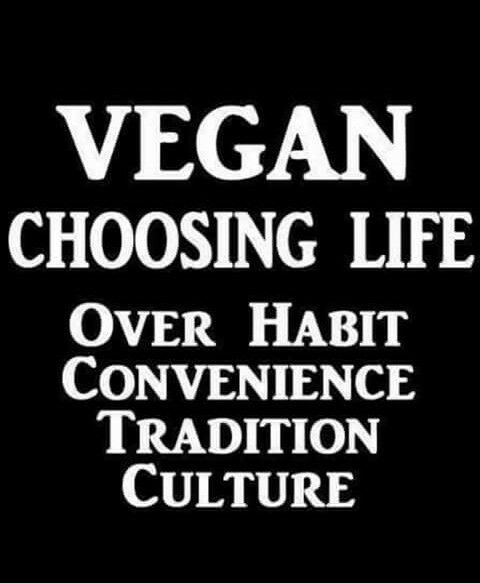 …I don’t give an ounce of fuck what y’all eat as long as it didn’t come from an animal.
I ain’t Judgy McJudger about vegan food…
If you are vegan, almost vegan, or considering vegan…& y’all encounter one of ‘those vegans’…just fucking ignore them.
They’re full of shit & they polish their turds.
Don’t waste your time.
Don’t be bullied.
Wanna eat vegan food that contains preservatives?
Eat em…it’s still vegan.
Wanna eat an accidentally vegan food from a non-vegan company?
Eat it…it’s still vegan.
Wanna buy Ben & Jerry’s non-dairy ice cream even tho they’re not a vegan company?
Buy it…it’s still vegan.
Wanna have a family?
Adopt children, plenty of them out there in need of families. And, the planet is already overpopulated. Odd that these super vegans wanna get knocked up/knock someone up.
Wanna shampoo your tresses?
Go for it…there are tons of cruelty free products out there. Going ‘no poo’ does not equate to veganism.

Besides, let’s be honest…vegans are still merely humans. They suck outta the gate…granted, less suckage than animal eaters…but, still…

Any vegan that runs their mouth about a fucking tofu pup not being vegan cos it is counterpart to a hot dog…you got the go ahead to tell them to shove their head up their feces-free ass.

Do the least amount of harm.

Sell your soul to seitan!