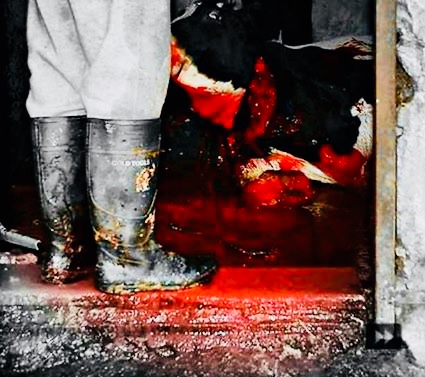 Twas the eve of Christmas, when all thro’ the slaughterhouse,
All creatures are products destined for a chophouse
The chutes are all filled by the workers without care,
In hopes that their shifts end soon would be there;
The animals were crowded, on cold, shit covered beds,

While terror, anxiety, & stress danc’d in their heads,

When out from the kill floor there arose such a clatter,
Workers sprang from their seats to see what was the matter.
Away to the steel gates they flew like a flash,
Taking in the scene, a new guy threw up in the trash.
The fluorescents fell crudely on a full blown horror show,
Giving lustre to animal blood & a dying bellow;
When, what my widening eyes saw here and now,
But a bolt gun, a cleaver, and a helpless brown cow,
With a plump clever worker, so cruel and so quick,
I knew in a moment it was that bastard named Nick.
He was dress’d all in rubber, from his head to his foot,
And his apron was all tarnish’d & bloody, the brute;
A collection of fresh body parts was flung on his back,
And he look’d like a homicidal maniac just opening his pack:
More violent than ever he murdered animals the same,
And Nick grunted, and mocked, and call’d body parts by name:
“Now! Flank, now! T-bone, now! N.Y. Strip, and Prime rib,
“On! the superb filet mignon, on! Oh, & short ribs” ;
“To the top of the flames, to splatter melted fat on the wall!
“Now season away! Sear away! Grill mark them all!”
So out to the loading dock the workers they flew,
With them unloading a transport truck – with Nick too:
He scrunched his broad face, as he kicked a cows belly
She trembled when kick’d, like a bowl full of scared jelly:
She was lame and limping, a right pitiful sight,
And Nick laugh’d when she faltered, all for your appetite;
A flash of her eye and a jerk of her head
Soon the smell of blood hit her, Which filled her with dread.
Nick spoke not a word, but went straight to his work,
And grab’d the captive bolt gun; pull’d the trigger with a jerk,
And the heavy rod flew, destroying a part of her brain:
Her knees they buckled, collapsing, she spasm’d in pain
As I drew my hands to my head, to shield sight and sound,
Down to the floor, the feeble cow fell with a bound:
And she lay’d on her side, tho she wasn’t quite dead
Nick raised up his boot, kicking her right in her head.

His eyes – how they glazed! his bloodlust how scary,
His cheeks dotted with her blood, like a smashed cherry;
And there stood Nick, Watching her, oh, so aloof
The twitching and jerking of each dying hoof.

Her wide eyes still plead’d, the most beautiful brown
She drew a gurgling breath, and in her own blood she drown
As dry heaves before the bile, & vomit did fly,
When I stared into the eyes of my ‘dinner’, I wanted to cry;
& you ‘an your cheeseburg’ with ketchup on top,
You just settle for tradition; your plates full of crap-
The steak that you cut up, and grind with your teeth,
You chew and you swallow indoctrinated belief.
Abjure every food notion you’ve ever known
And, rightly, leave animals the fuck alone
But Know why this scene is kept out of sight-
Be Vegan, to all, and for all animals- RIGHTS 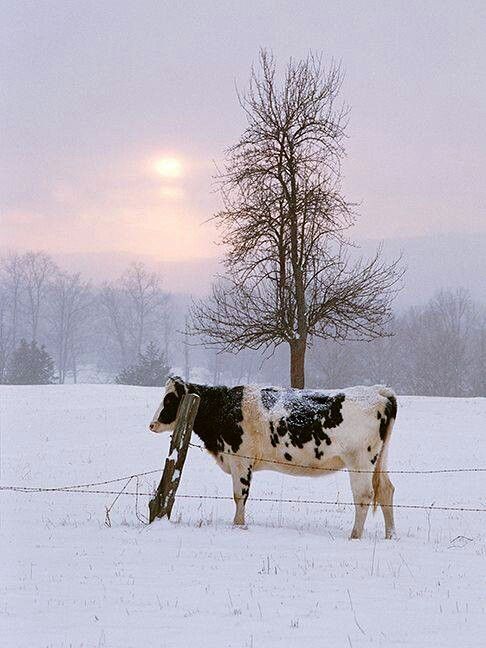