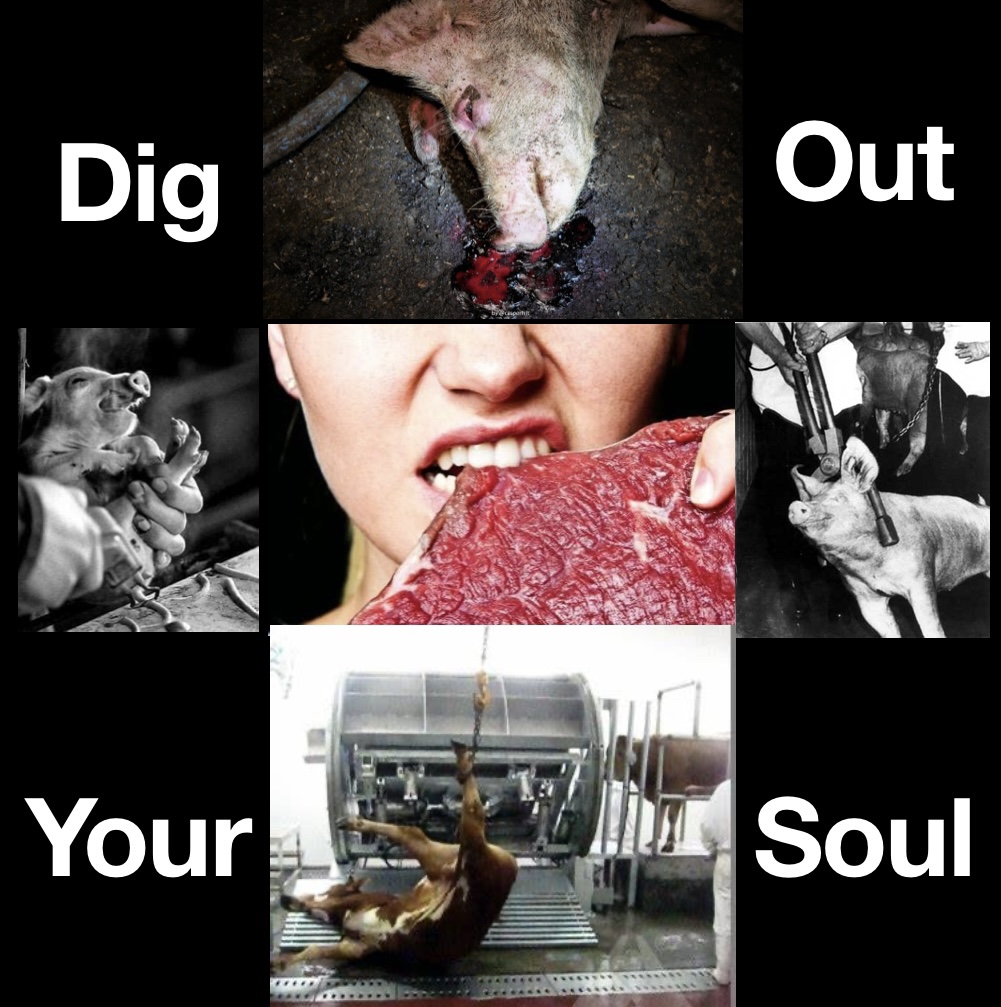 Meat was a lie, and to continue to accept the lie is ignorance.

Think quick;
What’s 8×8?
So, how fast did you answer?
Maybe you use ‘eight times eight fell on the floor, when I picked it up it was 64’…….
&
Do you drive a manual vehicle?
Do you ever even think about shifting?

Both examples were created through repetition & conditioning.

Now, really think about how meat is extended into commercials, magazines, television, movies….
Ask why you see and hear the same meat lie over and over again throughout the day.

The speciesism pairing process is the association of dog equals love, cow equals burger, pig equals bacon, etc…
The pairing creates discrimination via speciesism, and manipulates your emotions by desensitization to the suffering caused by ‘meat’.

Yo,
There is a study that shows an individual with a neutral view of a specific group, then negative words like ‘hate, murder, fear,etc…’ were paired with the neutrally viewed group, that individual would begin to have negative view of the group.
Yep…..
So when you were a little cotton brained kid, your parents told you the meat lie. Your elders speciesist views influenced how you could feel strongly about a dog, & how you could care less about a cow based on the emotional context.
This same process can also change negative perceptions into positive perceptions by pairing the cow with the truth.
Hellooooooo veganism!

Now… imitation is fundamental to the survival of our species….
…it is fundamental in our learning.
We imitate each other.
It’s imperative for social functioning, & we actually start imitating others when we are wee babies. So, we have an exceptional imitation repertoire!
Theres been loads of studies done on imitation;
Link between watching violent television and aggressive behaviors that are a direct result.
…now, quickly think about slaughterhouses, rodeos, BBQs, Yulin, taxidermy, a ham sandwich, etc….
This does not mean that people WILL go kill because they saw it in a movie……..but you should be aware that we tend to imitate behaviors that are reinforced, & that are self-reinforcing. (Pet the dog eat the chicken, & don’t abuse animals while eating meat.)
That’s discrimination…..Speciesism.

The meat lie is swallowed by the masses…
Not eating animals is ridiculed…mocked…hated…in an attempt to pressure the individual to fall back into formation.
The mythic meat….the lie….the conditioning…the brainwashing….

Do give permission to others to kill other animals?
Do you permit others to repeatedly pair cooked body parts to make you feel a craving, & influence your behaviors?