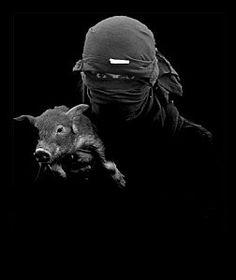 It had pissed down rain and temperatures dropped overnight, so that the gravel was frozen together like slippery sandpaper.
His fingertips were pinching from the cold, his breath swollen around his face on each exhalation. He stood in the bitter parking lot like a bonfire.
He came to eat fire. He was ready for a fight and it was waiting for him inside.
He didn’t have any former training. He came not to spill blood, but to prevent blood from being spilled.
They were already inside. The killers.
There were 3 vehicles parked out back, and Rob recognized each one of them. He was certain there were at least four inside, maybe even five.
They all had weapons ‘you can bet your ass, they do’ thought Rob.
His hands and pockets were empty. He looked around toward the road, traffic was picking up, getting thicker like insects do. He realized he was grinding his teeth and he stopped. It was almost time.
He was just going to go through that door, ignore the insults, ignore the stinking fucking slob with mop hair and acidic breath that always got in his face. “Whatcha gonna do, queer-bait?” was a favorite of mop heads. His jagged sweaty smile stretching across his vile face.

Rob heard their cries before he could see them and his pace quickened instinctively as his heart sped up. The smell inside determined to crush his lungs with ammonia and fresh blood.
He saw her. There were two men surrounding her and her children. He could tell by the look on her face that they had been tormenting her for some time. The skinny one was laughing, mocking her.
Rob knew the fucker in the baseball cap. He had many violent encounters with him before, today wouldn’t be any different.
He had what looked like a skinny board resting on his shoulder. His filthy hands had left marks indicative of where he had held it. The end was rusty and dirty. Dried blood and shit. He saw Rob and he smiled. Sadists like to let you know how much fun it is for them. Rob held his breath.
“Look who’s here, did you miss me?” He yelled
Robs eyes shifted to the her; she was bracing herself, her body shaking as she cowered. There was no place she could hide from the blows. She was already badly bruised. Rob could see her panicked breaths from across the room.
His eyes darted back to baseball cap and the weapon he was holding. Rob tried to keep his eyes off her, hoping to divert attention. It wasn’t any use. She was, after all, the reason Rob was here. Baseball cap knew it.
Skinny guy kicked at her-missing, she cried out and tried to disappear into the wall. Rob felt his jaw tighten. He wanted to kill that skinny fucker. He had dreamt about it. A smile spread recalling the dream-skinny guy pleading for his life…
“What the fuck you smiling at, fag?” Baseball cap yelled, snapping him back to the moment. He had a nervous look suddenly, Rob knew his smile decentered him. These guys thought he was fucking crazy. For as much as they bullied and threaten him over the years, they were all visibly intimidated. Rob had that effect on people.

He lucked out in May.

The slaughterhouse worker that had beat him with the same 2×4 used to kill the mother pig and all but one of her babies was in jail for assault. The witness testimony by the others was priceless. Most compelling was the slaughterhouse camera footage. They had to show the entire 28 minutes. Because Rob was there.
The fucker wielding the 2×4 mercilessly down over the mothers head and back. Her screams. Frantic babies darting to their mother all the while she was being mauled. One guy punting a tiny piglet. Rob standing-helpless- watching. Then the mother stopped screaming. A bloody mangled heap. He turned his slab of bloodied wood onto the piglets. One by one. Splattering their brains and guts- tiny teeth flying and breaking on the filthy, gore covered floor.
Then, there is was. 26 minutes in-the one.
A tiny piglet-speckled with her families blood.
She was about 2 feet from Rob. The 2×4 raised, Rob dove.
He fell around her. His arms surrounding, covering her with his neck and shoulders.
Whack.
That one blow, intended for the wee baby, hit him in the back of the head.
A flash of white, then black. Sounds faded and slowed. A kick to his side. It quickly registered that this man was trying to get the piglet out from underneath him. Another kick. Rob felt the air erupt from his lungs. The smell of blood and ammonia. The screaming terrified baby he was trying to protect.
Rob looked up-the same way he had seen animals look before slaughter. He looked up for mercy.
None.
It seemed to only enrage baseball cap.
The 2×4 came down hard on Robs right cheek. White, then black again. He could only recall a blur after. The footage showed two of the other workers grabbing the plank and tackling the guy. Rob, still laying, protecting the piglet. The rest is history.
MRI, stitches, a hell of a headache, and, a little girl piglet he named Dove.
Or, Dovey, as his brother called her.